I can't remember a time when i wasn't trying to rescue animals. I can go back to being 5 years old and wanting to bring home every stray. I believe my first true attempt at helping strays came with a ferrel colony that was being fed by an elderly man. When he passed away there was no one to care for them. My mom was a single parent and we lived on a tight budget. I was around eight years old and started feeding this colony. One by one, a new cat would show up at out basement. I fed them whatever I could find in the cupboards. After about 30 cats decided to make our yard their home, my mom soon caught on. There were no spay and neuter programs; there were no animal rescues. It took a lot to relocate them to farmers barns. It was the only thing we could do. Over forty years later, I am still trying to save every animal I can. I know it's not possible to save them all but I am sure going to try.

I have had a pet or pets since I can remember...loved them...lost them...always had an attachment to all of them. As I grew older I realized that we are their voice, their hope and their happiness. In return they give unconditional love. It's all about the animals...such as my Chance. She was a surrender to a shelter and we fell in love. She is a joy to our family! 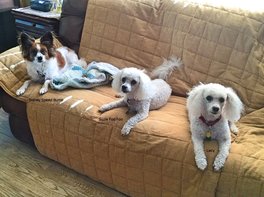 I became passionate about adopting rescue dogs and helping other rescue dogs find their forever homes while volunteering at a local animal shelter. I volunteered from Sept. 2003 - Nov. 2016 and saw first-hand how older dogs and cats were dumped in a shelter with little hope of being adopted. My dream is to have a sanctuary for the older animals where they can thrive and live out the rest of their lives in dignity and a chance of being adopted. For now, my focus is on helping animals in need in our community get medical attention that would not be possible without our help.

I first met Annabelle when visiting a local animal shelter at Lake of the Ozarks.  She was huddled and shaking in the back corner of an enclosure – a filthy white mass of fur with big black eyes and thick mucus running out of her nose.  Not only was she physically sick, but she appeared psychologically damaged as well – catatonic is the only way to describe it - not moving or making eye contact; just  frozen, wanting to be invisible.  After asking what was wrong with her, I was informed she was rescued from a puppy mill after 8 years of living in a cage.   The rescue was actually considering euthanasia to end her suffering because she was so traumatized.  My mind was made up - Annabelle was coming home with me.  And so began a journey that would change both our lives forever.
After a trip to the vet, Annabelle was diagnosed with a severe sinus infection, caused in part by the one remaining tooth in her mouth that was badly infected and needed to be pulled.  In addition, her toe had been mangled and broken at some point during her captivity and never treated, so amputation was the only option to alleviate the pain.  She was also diagnosed with congestive heart failure, which would require daily medication for the rest of her life.  Once her medical needs were met, the next challenge was getting her to eat.   She refused chicken, beef, cheese – I tried everything, but she was on a hunger strike.  After a few tense days of thinking she was going to starve to death on my watch, she finally began to eat.
Thankfully there were already two other rescue dogs living with me who eventually taught Annabelle how to ‘just be a dog’, but it didn’t happen quickly.  She spent most of her days crouching in corners and trying to disappear into the walls.  It took months for her to make a sound – the first time she barked I immediately called my mom to report this monumental achievement.  It took more than two years for Annabelle to learn not to cower away when a human approached her - any human, including me.  She eventually learned to run and play and embrace the joys of life with total abandon as a beloved member of the family.
While Annabelle was changing, I was changing too - I learned more than I wanted to know about puppy mills, and could no longer just sit back and do nothing.  I began working with other rescue groups to pull dogs from puppy mills and place them in shelters and foster homes across the country.  Spreading awareness to end the needless suffering became and remains my number one goal.
Annabelle spent the first 8 years of life in a cage and the last 5 years of her life with me.   Most people think I rescued her, but in reality, she rescued me.  Annabelle has changed my life and inspired me in ways I can’t begin to explain.  All I can say is that I would not be the person I am today without having known her.  I am eternally grateful for all the things she taught me.  Watching her transform from a broken, hopeless creature to a beautiful happy soul was one of the most inspiring things I’ve ever witnessed.  Because of Annabelle, I’ve learned that there is no lost cause, no hopeless case and it’s never too late to live happily ever after.
© 2022 Caring Hearts Dog and Cat Rescue | Original design by Livewire Creations